Guitar players have been plagued with carpal tunnel syndrome and muscle cramps. This is a modern era phenomena. The term "carpal tunnel" was lightly mentioned circa 1892, which correlates with the advent of radio transmissions. But the term only became common around 1932. That correlates with electric guitar and electric appliance popularity. 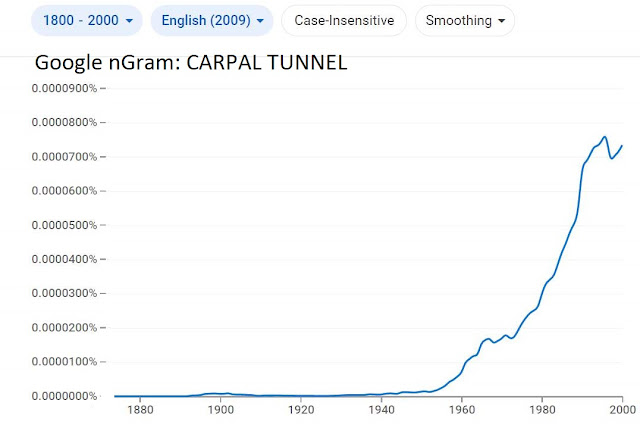 Fine muscle function and any coordination is related to chronic and acute EMF exposure.

Have you ever wondered why the old manual typewriters didn’t cause carpal tunnel and the new easy-to-push electric computer keyboards are causing so many problems?[ref]

Only adrenaline and other supportive hormone-like macro-molecules keep the ship stable. Eventually, the ship is overloaded and it sinks. The musician cries tragedy, sees a Medical Doctor, who will ignore the musician's environment (WHO orders him not to empathize with patients who suspect EMF).

He will likely advise surgery and/or pills on the diagnostic basis that carpal tunnel is caused by repetitive motion. The Doctor collects a fee and unless the environment is changed by wisdom or accident, a greater health disaster awaits... with more fees.

The environment of an electric musician is worse than the average person's environment: Wah-Wah pedals, equalizers, synthesizers, saturation and sustain pedals, not to mention the octaviders. mics, switchmode transformers everywhere that power all the devices including LED and fluorescent lights, plus the wireless junk. Their instrument uses steel strings and a magnet transducer, plugged into a pre-amp and amp that are plugged into a utility power cable emitting high "dirty electricity".

Example: Allan Holdsworth, is said to be possibly the greatest innovator of electric guitar since the 1960s. He always ran his guitar through a synth and was an 'electronics' innovator. By his late thirties, he was had severe carpal syndrome.

Here he is at home, buried in EMF, and stumbling around -- just before he died of the final EMF symptom, a stroke. He can hardly strum the strings. He says, "I'm an old man." "It was easier in the old days." 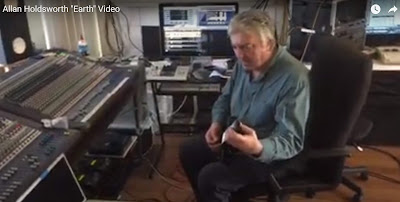 Here is a video that demonstrates how much dirty electricity comes through a plugged device.

Circa 2012, I awoke to the ongoing EMF holocaust while living and sleeping over Con Edison main lines, which fed 126 luxury apartments in Manhattan, all running air conditioning, etc. I suffered many symptoms and was on m way to tortuous death were I not made aware by fellow environmentalists of the symptoms of EMF exposure: Cancer, neurological damage, depression, insomnia, backache, rashes, muscle atrophy, eye, ear, and dental problems, etc.

I recently found EMF to be related to a specific fine motor dysfunction.

In 2019, after decades of being out of the scene, I was recovering my skills as a brass instrument player. I was practicing with the mouthpiece only.

Not wanting to disturb anyone (as it was night), I went into the bathroom, turned on the lights, and practiced.

After 20 seconds my throat locked up, as if there were a "tick" in my throat. I could not continue the exercise. Aside: This had also happened previously on stage during a solo performance.

Being EMF-aware, I looked around and realized that the bathroom lights were fluorescent bulbs (high EMF generators). Important: See here and here.

I turned off the lights and found that I could immediately continue the exercise without any problems. Yes, this is anecdotal, but based on 10 years of studying EMF bioeffects.

It is common for modern-day opera singers, the greatest of all, lose their voice, damage their voice, lose their will, blown out. This is EMF, which is especially prevalent among people in stage and theater, not to mention the usual EMF at home.

The implications are vast. That means EMF affects every fine and subtle thought and motion we have. Every opportunity to avoid any EMF must be taken.

This would apply to those trying to improve guitar playing, the fine motor skills involved in strumming and finger-picking, etc. Practice in the lowest EMF environment possible. Maybe that's why successful writers, artists, and musicians move to remote areas. I moved, but routers/modems, smartmeters, and utility earth current are still a problem.

The same issues of fine motor coordination goes for vocalists, the fine apparatus of the voice, and writers, thinkers, everyone: The fine hormonal coordination and interactions of the nervous system is magic, but vulnerable. Protect it.

Early 2021, I had permission to turn off breakers in a house I was renting. I had not been practicing singing at all, but after three weeks of this low EMF environment, I sang from low F of the bass clef, to high F of the treble clef, with full voice, no falsetto.

This occurred during my discovery and subsequent research into earth utility current.

Disclaimer: The author is not an authority or professional. For medical advice, see a trusted professional without delay. All statements are hypotheses for discussion. Constructive criticism is welcome.
Fair Use Act Disclaimer.
This site is for discussion purposes only.
Copyright Disclaimer under section 107 of the Copyright Act 1976, allowance is made for “fair use” for purposes such as criticism, comment, news reporting, teaching, scholarship, education and research.
Intellectual Property Rights
The intellectual property aggregated and redistributed in this site is for educational use only and is considered protected by standards of fair use. Intellectual property owners have been cited where possible. Original material produced for this site is copyright Jim West / harvoa, All rights reserved.
Please support this work by sharing, buying books, or donating.
- October 01, 2020

by Jim West   (please share and cite) Steve Kirsch and Dr. Mercola have had much publicity in the mainstream media for being Top Misinforma...