Since the 1990s it has become obvious, for instance, during a Sunday walk, that childhood disease has been escalating, e.g., cancer, eye problems, autism, ADHD, misshapen heads and bodies, etc. So this would not be a mere result of improved testing.

Officials similarly indicate an increase in childhood cancer, e.g., The American Cancer Society issued a "Special Report" with this graph. 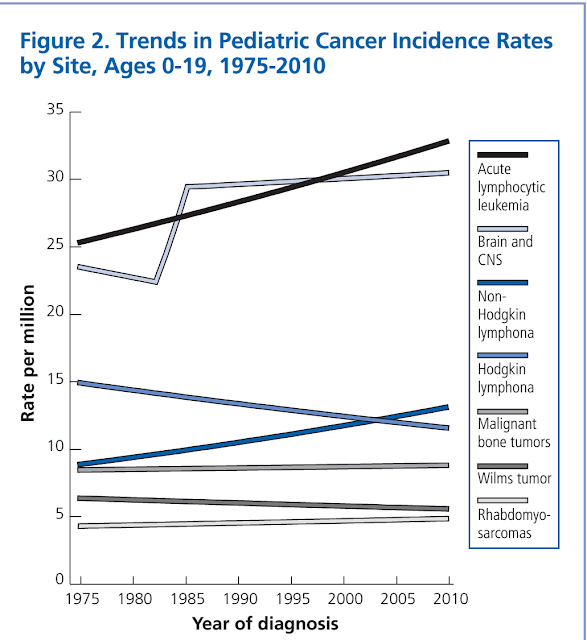 I posit prenatal ultrasound as a substantial contributor, as stated in my book (2015),


The long-term emerging epidemics of childhood cancer seems evident via JZhang (2002). The general belief is that cancer is the result of an accumulation of DNA damage. DUS [diagnostic ultrasound] should be considered as the obvious relevant causative stressor, directly or as a synergist.


No specific ultrasound-cancer studies directly support this idea, so here is a simple logical argument.

Given: Cancer is the result of genetic dysfunction.


Cancer is a genetic disease—that is, cancer is caused by certain changes to genes that control the way our cells function, especially how they grow and divide...

Cancer-causing genetic changes can [be inherited or...] acquired during one’s lifetime, as the result of errors that occur as cells divide or from exposure to carcinogenic substances that damage DNA, such as certain chemicals in tobacco smoke, and radiation, such as ultraviolet rays from the sun.

NCI omits "X-rays" or "ultrasound" as it provides examples of destructive "radiation". It names only the sun, an essential part of our evolution through billions of years. This indicates NCI's conflict of interest with industry.

NCI says that dysfunctional genes can be inherited or acquired during one's lifetime. Yet, genetic dysfunction during pregnancy is more likely acquired from environmental stressors because it is misdiagnosed as an inherited mutation. Gofman (1992)

To expedite the ultrasound argument, I accept the NCI premise, that genetic dysfunction is a major cause of carcinogenesis. Now, how do genes become dysfunctional?


Childhood cancer rates have been rising since the 1930s due to ever increasing chemical pollution, e.g., pesticides, fluoride, and industrial effluents.

Many scientists point to a possibly greater threat, the pervasion of electricity and its radiation, i.e., electromagnetic fields (EMF).

With electricity also comes a direct and focused source of radiation, routine prenatal diagnostic radiation in the form of X-rays and by the mid 1970s, ultrasound.

X-rays are known to cause childhood cancer.

...radiation exposure during pregnancy... leads to serious harmful effects to the fetus, including increased risk of leukemia and other malignancies.

Prenatal x-ray exposure is one of the few well-established environmental risk factors for childhood cancer.


Contrary to popular belief, many studies find that ultrasound causes genetic damage like X-rays, e.g., Liebeskind (1981), JZhang (2002), and Hočevar (2012). Present-day authorities admit this for animal and cells studies, but deny this applies to humans, even claiming that humans could be "immune" to ultrasound.

Ultrasound is the direct result of radio frequency circuitry driving a quartz piezo-electric chip. Frequencies are higher than the AM radio band. Ultrasound is ready-to-go mechanical transformation of EMF.

One ultrasound session is equivalent to 1,000 or more chest X-rays.

This stunning number is extrapolated from a statement in a CNN documentary, year 1983. Scientists from Columbia University were interviewed about ultrasound. The statement was "250 chest X-rays", but when extrapolated to current values, this would be much higher. Extrapolation is necessary because in 1983 (vs present-day) a chest X-ray was higher intensity and prenatal ultrasound was lower intensity.

Doreen Lieberman, MD (lab researcher), and Arthur Bloom (geneticist), were interviewed for the CNN documentary in 1983: 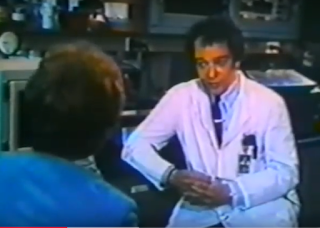 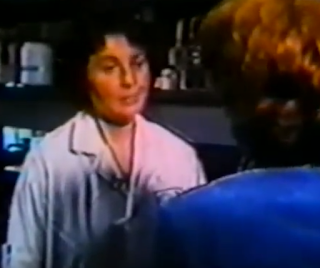 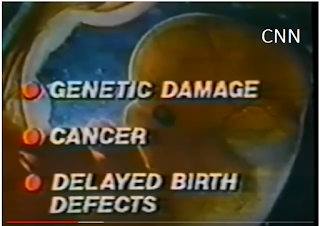 One ultrasound session will readily fragment maternal and fetal genetic matter according to JZhang (2002). The graph below (a photo of the result of gel electrophoresis), shows DNA fragmentation at ultrasound intensities far below that of a typical clinical ultrasound session.

In conclusion, I reiterate the argument.

Given: Cancer is the result of genetic dysfunction.

Thanks to Sallie Elkordy for encouraging this project.

Disclaimer: This is for discussion only. For medical advice see a trusted medical professional without delay.

Prenatal ultrasound contributes to childhood cancer by Jim West Since the 1990s it has become obvious, for instance, during a Sunday wa...